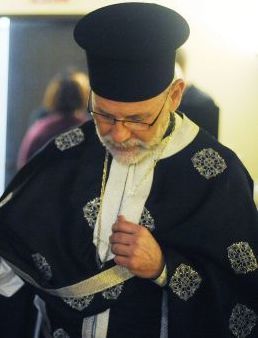 A native of St. Louis, Fr. Daniel attended Biola University completing a BA in Biblical Studies in 1979. He attended the International School of Theology, graduating with an M. Div in 1983. He obtained a second BA in the Classics at the University of California, Irvine in 1989, and a Master of Arts in the Classics in 1991. He and his family converted to Orthodoxy in January 1994.

In December 2007, Fr. Daniel was ordained to the holy priesthood. He played a significant role in establishing St. John the Theologian Orthodox in 2008 – the first Orthodox parish in southern Missouri. Father Daniel and his wife have been married over 40 years. Both of them love cycling. They have two children, and two grandchildren.